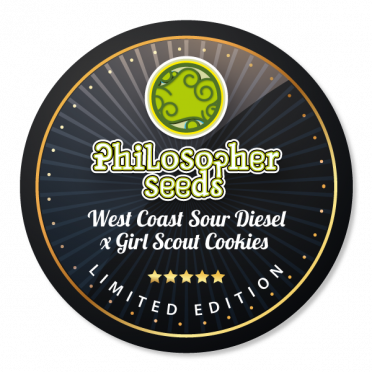 This hybrid aims to combine the intensely stimulating effect and delicious “Sour” aroma of the WCSD with the sweetness, potency and resin production of Thin Mint Cookies, resulting in an incredible plant in every way.

Without a doubt, this is a high quality Sativa-leaning hybrid that will quickly become a favourite in your cannabis garden.

Given that OG Kush and Sour Diesel share the same Chemdog genetic heritage, by combining them we have managed to unite their best characteristics, creating a plant that’s similar to Sour Diesel but with higher yields. Expect bushy and well-branched plants that grows in a rounded, ball-like shape, developing lots of flexible secondary branches surrounding the main tip, like spears protruding in all directions.

This hybrid is highly suitable for growing in SCROG, as its vegetative vigour means that it will quickly fill the trellis, producing a dense canopy of fat buds during flowering. Plants are ready to harvest after roughly 70 days, producing around 500g per m2 of swollen, dense flowers spread across al the branches, with “popcorn” style calyxes totally bathed in resinous trichomes forming really large colas.

The flowering plants give off a vey intense aroma, mixing notes of fuel, acidic sour fruit and sweet floral flavours, so powerful that it means the use of a carbon filter is essential for indoor cultivation.

The effect when consumed is euphoric and cerebral, pleasant and motivating, filling you with creative energy which makes it perfect for partying or sharing with friends.

As a male, we have reversed the mythical Thin Mint cut of Girl Scout Cookies, an Indica-dominant hybrid of Durban F1 (Cherry Pie Kush S1) and OG Kush, highly appreciated for its potency and resin production. It has a similar structure to OG Kush, growing vigorously and developing a thick central cola surrounded by multiple secondary branches reaching up to approximately half the plant’s height.

Its stems are flexible, with large internode spacing, meaning that the plants take on a bushy, leafy appearance and adapt readily to training and pruning methods, making it a really easy to cultivate variety.

The flowers take about 65 days to mature fully, in which time plants will produce yields reaching 450g per m2 of rock-hard buds totally covered in resinous trichomes.

The aroma is extremely intense, combining a Kush base with earthy, sweet touches and notes of chocolate, pastries and fresh mint.

The effect it produces is psychedelic, hard-hitting and fast-acting, provoking a very enjoyable sensations of euphoria that progresses to a powerful feeling of physical relaxation.

Hi Wood, thanks for your comment, I'd recommend you check out all our product pages for more diverse reviews. I can only see two reviews by Ryan, both on new varieties that have only been on the market for a short while. I would expect more reviews on those varieties soon. For other opinions on our work you can check Seedfinder, Grow Diaries or ICMag. Oh and yes, our seeds are most definitely legit!!!!

I hope that helps, best wishes!

Had a bad pheno and a good. The good had some beautiful colour and smells but didn't like the humidity in flower so watch for bud rot. I would definitely recommend a considered grower would get the best out of this strain and I would advise newer growers to choose a different strain. That said if you are vigilant you can grow some beautiful smoke just never be complacent or you could loose a lot of your harvest to environmental factors....

Hi Ryan, thanks very much for sharing your experiences with us. What a shame you didn't get 2 great phenos, we've been getting very good reports about this cross. You can certainly expect some beautiful colours from this hybrid, as you've observed, but the GSC influence does indeed mean that the buds can be too dense for areas with high humidity. You definitely need to be vigilant, and some preventative action is useful too. I like to top and train my plants which, instead of growing with one large bud, encourages them to produce a greater quantity of smaller buds which are less prone to mould attack. Thanks again for your feedback, best wishes and enjoy the smoke!

Do you want to give your opinion of West Coast Sour Diesel x Girl Scout Cookies or ask about this product?