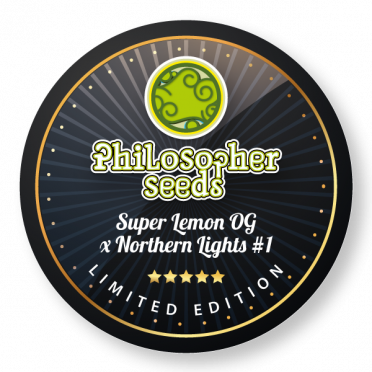 Continuing its commitment to innovation, Philosopher Seeds is expanding its series of limited edition hybrids combining US clones with top selections of European genetics and is now offering its new Super Lemon OG x Northern Lights #1, only available as a strict exclusive at Alchimia Growshop.

It is an explosive blend of genetics that complement each other perfectly, combining the power and flavour of Super Lemon OG with the yields, speed and easy cultivation of the legendary Northern Lights #1, a highly potent and productive Afghan.

This new strain grows with the vigour of Haze and OG Kush genetics, developing a more branched structure than its paternal ancestor. It responds well to pruning and can be cultivated using varied cultivation techniques such as SCROG, mainlining, super-cropping and even SOG (Sea of Green).

Outdoors, you can expect large plants, due to their huge vegetative vigour, thanks in particular to the genes from Super Silver Haze and Lemon Skunk, both inherited from the Super Lemon OG mother.

Super Lemon OG is a cannabis plant that contains a broad genetic map. It consists of Super Lemon Haze x Captain Krypt OG, with both parents rigorously selected from a large number of specimens.

Super Lemon OG grows vigorously, adopting a vertical structure similar to OG Kush, although it is quite easy to manipulate via pruning and tying.

During the flowering period is when this plant looks its best, displaying large and dense buds, covered by a thick layer of terpene-rich resin that evokes Haze fragrances with notes of OG Kush, and all with a powerful, active and long-lasting high.

On the other side of the hybrid, we find Northern Lights, a legendary variety that has set trends within the international cannabis market for years and that still continues to be cultivated and used in the creation of new cannabis hybrids, thanks to its highly valued characteristics.

It is a very simple plant to cultivate, so if you are a beginner grower, it's definitely a variety to consider. They are fast flowering plants, just 50 to 55 days, which allows us to realise multiple indoor crops in a single year. We should highlight its ability to create very compact buds, full of resin while giving off very little odour, which greatly facilitates stealth when growing outdoors.

In terms of flavour, it's a plant that your taste buds will never tire of, the taste is soft and sweet but without becoming sickly sweet. In addition, it works very well as a genetic base if you do not want to alter the flavour of a strain much, but instead to complement it with a sweet and soft touch on the palate, in addition to providing structure, density and lots of resin.

Do you want to give your opinion of Super Lemon Og x Northern Lights or ask about this product?