Early Maroc is Philosopher Seeds flagship strain. It is a variety especially suited for outdoor crops, either for your house or for guerrilla growing. In this post we’ll talk about its fast bloom and we’ll give you some tips to get the best results with this splendid variety. The pictures you’ll see are from Early Maroc plants grown in the Peninsula and harvested by mid August with huge, top quality flowers.

Early Maroc is also suitable for indoor growing, but you should take into account a few aspects that we’ll discuss later on.

In the upper picture we can see 7 Early Maroc plants which are already finishing their flowering stage, while the Orange Candy / Naranchup on the right is just starting to develop flowers.

In order to have a fast and early harvest, Philosopher Seeds recommends germinating the seeds as soon as the outdoor climatic conditions are optimal, right after the last frosts of the season. You can read our post about germinating marijuana seeds for further information on this subject. In Catalonia (North-East of the Peninsula) we usually germinate Early Maroc seeds by early-mid April.

In this area, we usually harvest Early Maroc by the second week of August, right when other strains are still developing their first buds. It may seem difficult to believe, but it’s true; Early Maroc is, probably, the fastest strain on the cannabis market today. Early Maroc next to an ecological swimming pool

Growing Early Maroc is also a good option for harvesting your plants before both thieves and authorities start patrolling the neighbourhood. In all senses, growing Early Maroc seems to ensure that we’ll harvest high quality buds without major problems.

Early Maroc is a very stable and easy to grow plant which simply loves sunlight. In relation with its yield, it needs very few care and maintenance. Any person, both novice and advanced growers, will get medium sized plants with heavy and large buds.

As we have seen, it is a perfect cannabis strain for guerrilla growing – also for ecological crops – since it needs much less water than other varieties, which is a true virtue.

On the other hand, it is also ideal for growers who have light pollution that disturb the natural photoperiod of plants. In the following picture, you’ll see a small wooden board above the Orange Candy / Naranchup to protect it from the light of a near streetlight, otherwise this strain would be affected by this nocturnal light source and would have problems to start flowering. In contrast, Early Maroc is not sensitive to this parameter and it continues flowering without problem. Early Maroc and Orange Candy grown under a near streetlight

Philosopher Seeds recommends germinating the seeds and performing a single transplant into a bigger container. To ensure best results, 50-60L pots are recommended, with an ecological and organic soil for cannabis. To improve water drainage, put a layer clay pebbles, volcanic rock or gravel at the bottom of the container.

While it is a relatively uncommon problem in outdoor crops, Early Maroc is a little sensitive to red spider mites. If grown near grapevines or other plants sensitive to mites – citrics, eggplants, courgette, beans, melons, peppers, watermelons, potatoes, tomatoes, cucumbers… – we recommend you to carefully check for pests or even use some type of ecological preventive.

Philosopher Seeds does not recommend Early Maroc for indoor grow rooms for several reasons. First, this strain tends to start flowering if growing conditions are not optimal. It needs a good amount of substrate to develop properly, and lots of lumens. If you want to grow it indoors, use 600W HPS lamps and 7L containers at least.

Keeping a mother plant of Early Maroc is difficult since, as we already mentioned before, it tends to start flowering even under an 18/6 photoperiod. It is also a difficult plant to feed when grown in small pots, since it does not tolerate well nutrient excesses or deficiencies, so it needs a special and accurate feeding schedule.

On the other hand, Early Maroc cuttings root easily and very fast.

In short, it is a perfect plant for outdoor cultivation which joins yield, quality and fast bloom.

We encourage you to give it a try and enjoy its delicious and early buds. Here you have more pictures of the Early Maroc…enjoy your harvests! 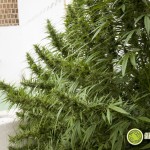 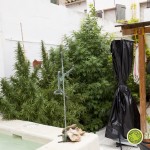 Next to another plant which is starting to flower 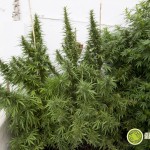 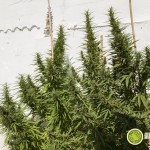 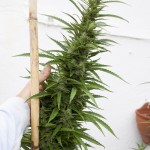 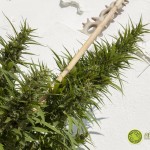 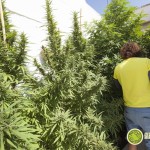 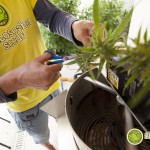